Matthew’s comprehensive theatrical career began as an actor at RADA. He performed for ten years before turning to producing after discovering Charlotte Jones’s In Flame and since then has produced numerous times directly into the West End and Broadway. He has partnered with many notable theatres including the Almeida Theatre, Donmar Warehouse, Royal Shakespeare Company, Lyric Hammersmith, Royal Court Theatre, Sheffield Crucible, Bush Theatre, Chichester Festival Theatre and the National Theatre which has resulted in many successful transfers to the West End and Broadway. In 2010, alongside Nia and Nick, Matthew set up Playful Productions where he leads the development team in finding, commissioning and building new work to produce. The team works to build lasting relationships with writers, directors and actors at the peak of their careers, as well as discovering and supporting emerging talent. Matthew is a Trustee of Sheffield Theatres and a member of the RADA Council. He was a producer of the Oscar nominated Universal/Working Title film Frost/Nixon and is an Executive Producer of the Netflix series The Crown, now in its third season, based on Peter Morgan’s The Audience.

Passionate about theatre since childhood, Nia’s early career included producing on the fringe in London and Edinburgh, as well as working as a Production Manager at the Theatre Royal Haymarket and in the technical department of the Royal Shakespeare Company. Nia spent a number of happy years working across both the management and artistic departments at the Royal Court and is still committed to developing new work for the stage. Nia joined Matthew and Nick at Act Productions as General Manager, working on productions such as Wicked, Frost/Nixon, Edward Scissorhands, Spring Awakening and Don Carlos, until 2010 when the three of them formed Playful Productions. Since then Nia has overseen all productions produced and/or general managed by Playful including Wicked, Kinky Boots, Shrek, Groundhog Day, American Buffalo and The Audience. Nia heads up Playful’s exceptional in-house production team and oversees all employment issues across Playful’s shows. She is committed to nurturing talent as well as striving to improve working practices across the industry. She currently serves on the boards of the Society of London Theatre, the Bush Theatre, the Stage One Council and is a member of the Theatre Industry Wellbeing Committee and the SOLT & UK Theatre Inclusion & Anti-Racism Working Group.

Although Nick’s interest in theatre dates back to his school days, he learned the West End business during his time as a theatrical agent. He also worked on several films including The Go Between and The Railway Children, before returning to theatre. During his career he has managed and produced for HM Tennent, Churchill Theatre Bromley and Theatre of Comedy at the Shaftsbury Theatre, as well as producing in his own right in the West End and on tour – over eighty productions in total. Whilst at Act Productions, he programmed their nine West End theatres and set up their production company, which he ran as Executive Producer until launching Playful Productions with Matthew and Nia. For over twenty years he was Chief Executive of Stage One, a registered charity supporting new UK theatre producers. He has served on several theatre boards including the League of Independent Producers and the Board of The Society of London Theatre of which he was president for three years.

Harriet originally joined Playful in 2018 as Production Intern, before returning to the Playful team as Production Assistant in 2020. In the meantime, she was Production Assistant at the Rose Theatre Kingston, working on shows such as My Brilliant Friend, Captain Corelli’s Mandolin and Stones in His Pockets. Harriet was previously Production and Development Intern for the Imaginarium Studios, part of the National Theatre’s creative development programme, and has a first-class degree in English from the University of Oxford.

Emilie started as an intern in 2011 before joining Playful full time and has assisted across both Wicked London, which she now looks after, and the Wicked UK and Ireland tour. She previously worked for Pippa Ailion Casting and Jorg Betts Associates after studying Drama and Theatre Studies at Royal Holloway, University of London.

Kate has over 20 years of theatre experience. She began her career as a production administrator for the National Youth Theatre and Fiery Angel Ltd before moving into a series of financial roles at Act Productions and the National Theatre, where she was Head of Finance. As well as theatre Kate has held finance roles in the NHS and Financial Conduct Authority. She is an Associate of the Chartered Institute of Management Accountants.

After graduating with a degree in Events Management, Sophie started her career working backstage and has gone on to work in operations and administration across London theatres, including The London Palladium, Regent’s Park Open Air Theatre and The Old Vic. Most recently Sophie assisted on the launch of the New English Shakespeare Company and their inaugural production of Much Ado About Nothing in Dubai. She's very excited to start a new journey with Playful in 2021 and is currently working on Wicked and Come From Away.

Roger is a founding Associate of Playful and has worked with Matthew, Nia and Nick for the past 15 years. He is an independent producer both in the West End and on tour, currently engaged in a world tour of Under Milk Wood, and is the European representative of the BAM Theatres New York.

Jesse joined Playful as Accounts Assistant in 2014 after studying Accountancy and Finance at the University of Huddersfield. She works across all productions supporting the finance department in various roles and is currently studying towards her professional accountancy qualification with ACCA.

Nick joined Playful in 2017 as the Production Accountant. Nick previously worked as an in house management accountant for the premature and sick baby charity, Bliss, where he trained for his professional accountancy qualification with ACCA. Nick also volunteers as the Treasurer for the amateur dramatics society Centre Stage London.

Since joining Playful in 2011, Aimee’s projects have included Million Dollar Quartet, Shrek The Musical, Dirty Dancing (tour and West End), Groundhog Day, Don Juan in Soho and Come From Away. Current projects include Moulin Rouge! The Musical. Prior to Playful, Aimee worked for Ambassador Theatre Group at the New Wimbledon Theatre and for Warwick Arts Centre.

Since joining Playful in 2016, Jack has worked on Charlie and the Chocolate Factory, An American in Paris and The Moderate Soprano. He currently works on Come From Away as well as the development of future projects. He previously worked for the Royal Shakespeare Company and, prior to that, gained a Master’s degree in Creative Producing from the Royal Central School of Speech and Drama.

Courtney joined Playful in 2016 and is currently working on Moulin Rouge! The Musical. Previously, she has worked on Kinky Boots UK Tour, Dirty Dancing UK Tour, Shrek The Musical UK & Ireland Tour, An American in Paris and Imperium for Playful. Courtney has a first class BA (Hons) degree in Theatre and Performance from the University of Leeds.

Chuchu joined Playful as Production Assistant in July 2021. Prior to joining Playful, Chuchu was Apprentice Producer on the West End transfer of Amelie & Assistant Producer at Talawa Theatre Company and, prior to that, worked in Higher Education after studying Theology and Religious Studies at Roehampton University. He is currently working across Get Up, Stand Up! The Bob Marley Musical, The Mirror and the Light and Moulin Rouge! The Musical.

A founder member of Playful, Janet has worked with Matthew, Nia and Nick since 2006, having previously been General Manager for producer Jenny King. As well as overseeing legal, investment and employment matters across all our shows, she has managed productions such as Quiz, No Man’s Land, Blithe Spirit, The King’s Speech and Flare Path.  She has a PhD in Ancient History and is a Research Associate at the Institute of Classical Studies.

Amy has a focus on the company’s creative development slate and producing new productions. Projects since joining Playful in 2012 include Get Up, Stand Up! The Bob Marley Musical, Noises Off, The Goat, Hangmen, American Buffalo, The Audience and Charlie & the Chocolate Factory. Previously she worked at the Barbican, Theatre Royal Haymarket and Donmar Warehouse. She was Associate Producer of My Mum’s a Twat at the Royal Court, is a Breach Theatre Company Trustee and a Mentor for Arts Emergency.

Since joining Playful in 2010 Annie has worked on projects that include The Audience, The Weir, Wolf Hall and Bring Up The Bodies, Hay Fever and South Downs/The Browning Version. As Executive Co-ordinator Annie is assistant to Matthew, Nia and Nick and manages investment across the productions. Prior to Playful she worked as an Assistant Costume Supervisor after gaining a degree from Central Saint Martins in Theatre Design.

Imogen originally joined Playful as Production Intern in October 2019. Prior to working at Playful, Imogen graduated with an MA in Performance Making from Goldsmiths College, University of London and completed a three-month production internship at the Arcola Theatre, East London. Imogen returned to Playful as the Administrative Assistant in May 2021.

Lucy returned to Playful in 2021 having previously undertaken a placement year in 2019-2020. She studied Accounting with Finance at the University of Portsmouth and has just graduated. She is passionate about learning more about the West End and works across all Playful’s productions supporting the finance department in various areas including royalties, purchase ledgers, invoices and payrolls.

Beth joined Playful in 2017 after 8 years as Producer at the National Youth Theatre, managing productions across the UK, the West End and internationally. Prior to NYT Beth has produced work at Shakespeare’s Globe and the National Theatre. For Playful, Beth has managed Lady Day at Emerson’s Bar & Grill, the Zurich, UK & Ireland tour of Wicked and is the company’s Tour Booker.

Kate joined Playful in February 2015 to work on Wicked before taking over on Kinky Boots (West End and UK & Ireland Tour). She now looks after Come From Away. Previously, Kate was Production Co-ordinator at Old Vic Productions (now Greene Light Stage), working in the West End on The Pajama Game, Good People and Private Lives. Prior to that, Kate’s roles include Assistant General Manager at The Old Vic Theatre Company and Associate Producer at Opera Holland Park across over 40 opera productions. 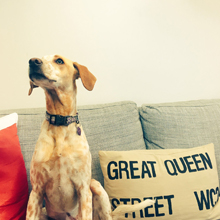 Yozi began her career as an apprentice truffle hunter in rural Spain, but in her heart she knew she wanted to work in theatre, and when an opportunity came up at Playful she jumped at the chance (and was told to get down). She can smell a hit a mile away and literally eats, sleeps and wees theatre. A Shakespeare fan, her favourite plays are The Lurcher of Venice and A Winter’s Tail. In her spare time she likes to chase balls.