Wolf Hall Parts One & Two to open on Broadway 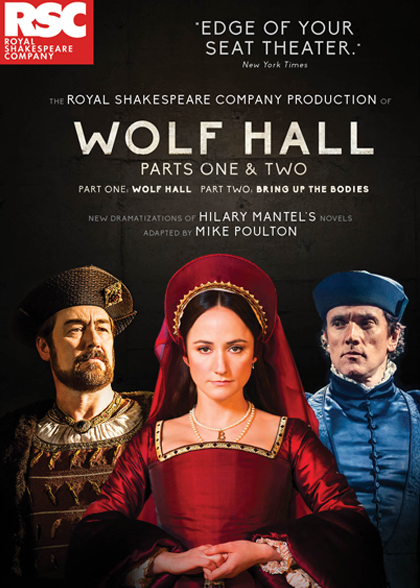 After critically acclaimed and sold out runs at the Royal Shakespeare Company’s Swan Theatre in Stratford-upon-Avon and at the Aldwych Theatre in London, the theatrical event Wolf Hall: Parts One & Two will arrive on Broadway on the first day of spring, 20 March 2015.

“Two fast, darkly comic plays that will not disappoint fans of modern political dramas such as House of Cards.” Mark Lawson, Guardian ★★★★★

Based on the best-selling novels by Dame Hilary Mantel, Wolf Hall: Parts One & Two will invite theatre goers to be part of a unique theatrical experience, similar to the Royal Shakespeare Company’s award winning production of The Life and Adventures of Nicholas Nickleby.

“Thomas Cromwell, the guileful right hand to King Henry VIII, was said to be fluent in many tongues and adept at double talk in all of them. But I imagine even he would be impressed by the act of translation of Hilary Mantel’s best-selling shadow-steeped and highly nuanced novels about Cromwell, ‘Wolf Hall’ and ‘Bring Up The Bodies’. Bright, brisk, and absorbing, these are true works of popular theater, enlivened by splashes of pageantry and vibrant performances. The storytelling momentum builds into a gallop that irresistibly pulls us along.” Ben Brantley, New York Times

Wolf Hall: Parts One & Two are adapted by Mike Poulton from Hilary Mantel’s Man Booker Prize winning novels, Wolf Hall and Bring Up The Bodies. The plays are based on the deceit, betrayal, and intrigue of the court of Henry VIII. The production features a company of more than twenty actors, headed by Ben Miles as Thomas Cromwell, Lydia Leonard as Anne Boleyn, and Nathaniel Parker as King Henry VIII, all under the direction of Olivier Award nominee Jeremy Herrin, who makes his New York City directing début. The Royal Shakespeare Company is appearing with the permission of Actors’ Equity Association.

“This adaptation of Hilary Mantel’s novel shows the RSC ensemble at its best. History unfolds in front of your eyes.” Sarah Crompton, Telegraph ★★★★★

“Having spent a most informative day and night at their rural digs in January, I thought I’d drop in on this attractive, slightly malicious crew for another tasty vivisection of their friends, lovers and rivals. And I have to say that when it comes to dishing the dirt, there’s not a scandalmonger in town who can touch them. I found myself more engrossed than ever by this galloping retelling of a fraught and pivotal chapter in English history (and divorce law) and I realized anew how much of the power of narrative relies upon gossip. That’s the force that transforms lives both ordinary and exalted into a never-ending, edge-of-the-seat serial that is subject to eternal mutation, and revision. In ‘Wolf Hall’, our ambition hero inhabits a landscape that has been infused with the feeling of dark corridors, dank country piles and urban alleys illuminated by torches and candles. It’s a world of shadows, ideal for those whose rises and falls depend on eavesdropping and peeking through keyholes. I was bewitched again.” Ben Brantley, New York Times

Wolf Hall: Parts One & Two will be produced by Jeffrey Richards, Jerry Frankel, Playful Productions and the Shubert Organization.

The opening day of Wolf Hall: Parts One & Two will be held on 9 April 2015 at the Winter Garden Theatre.