South Downs/The Browning Version to Transfer to the West End 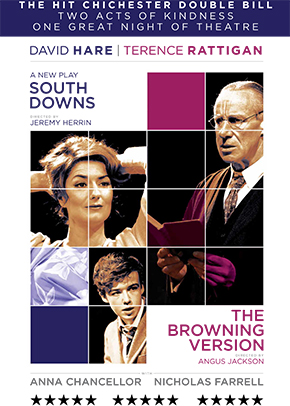 Anna Chancellor and Nicholas Farrell will once again lead the casts in these plays which examine life in public boarding schools. Rattigan’s own Harrow School and Hare’s own Lancing College provide the backdrop for two moving and resounding stories, one told through the eyes of a school master and one told through the eyes of a boy. Both revolve around unexpected acts of kindness which place the harsh and at times cruel worlds of these schools in stark contrast.

South Downs is set at Lancing College in Sussex where a pin sharp young pupil (a role reprised by young actor Alex Lawther, celebrated for his professional stage debut) is cut off from the rest of the school by virtue of his own intellect, background and questioning spirit. The school in response presents an unyielding and rigid outlook on life that leaves the boy isolated and confused. In an unlikely meeting with the mother of another pupil, her generosity of spirit and sound advice present the boy with a world of kindness and possibility.

Rattigan’s The Browning Version presents the retiring Classics Master Mr Crocker-Harris, tired, dried up and an abhorred tyrant with his pupils. Stuck in a broken marriage and facing the prospect of a retirement with no money, a simple act of generosity by one of Crocker-Harris’ pupils brings out the deep-rooted dignity and heart-breaking sadness that give this play its power.

South Downs is directed by Jeremy Herrin whose work in 2011 included Joe Penhall’s Haunted Child (Royal Court), Death and the Maiden (Harold Pinter) and the critically acclaimed Much Ado About Nothing (Shakespeare’s Globe). In 2007 Herrin directed the UK première of another play by David Hare, The Vertical Hour (Royal Court) as well as Polly Stenham’s That Face (Royal Court), which later transferred to the West End.

The Browning Version is directed by Chichester Festival Theatre Associate Angus Jackson whose credits at Chichester include Wallenstein, Funny Girl, The Waltz of the Toreadors and Carousel. At the National Theatre, Jackson has directed Elmina’s Kitchen, Fix Up, Rocket to the Moon and The Power of Yes (by David Hare). His production of Bingo, starring Patrick Stewart and originally part of Chichester’s Festival 2010, transfers to the Young Vic this month.