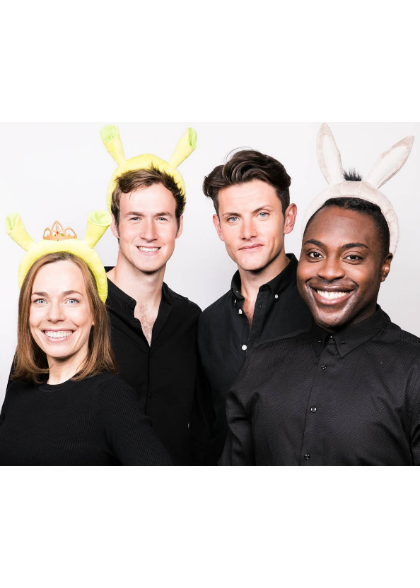 Casting has been announced for the nationwide tour of Shrek the Musical. Leading the cast as beloved swamp-dwelling ogre ‘Shrek’ will be Steffan Harri, who previously starred in the original UK tour of SHREK THE MUSICAL®, and Call the Midwife star Laura Main as ‘Princess Fiona’. Also joining the cast will be Marcus Ayton as Shrek’s wisecracking sidekick ‘Donkey’ and Samuel Holmes as pint-sized villain ‘Lord Farquaad’.

Laura Main (Princess Fiona) says: ‘I’ve been waiting a long time for an adventure like this to come along and now that it has I am ready to swap the surgery for the swamp in one of my favourite musicals. Shrek has made a Believer out of me and I can’t wait for this fairytale to take me across the country.’

Laura Main is best known for her role as Shelagh Turner in the award-winning Call the Midwife (BBC/Neal Street Productions). Appearing initially as Sister Bernadette, she left behind her life as a nun to marry Dr Turner. Laura has appeared in all six series to date and will return for this year’s Christmas special and series 7 in 2018. She has also had regular roles as Rebecca Howlett in The Mill (Channel 4) and DC Alison Bain in Murder City (ITV). Stage credits include Company (Southwark Playhouse), Me and Juliet (Finborough Theatre) and State Fair (Trafalgar Studios / Finborough Theatre).

Marcus Ayton’s recent credits include Sammy Davis Jr in The Rat Pack Live, Ray Charles in A Tribute to the Brothers Live and Joseph and the Amazing Technicolor Dreamcoat (UK Tour).

Full tour dates and venues can be found here – www.shrekthemusical.co.uk