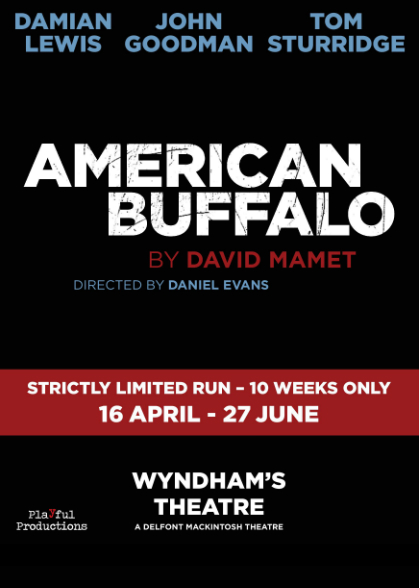 John Goodman said, “I’m delighted to be returning to the stage, and to be making my West End debut, in such a fantastic project with two brilliant British actors both of whom I’ve admired for some time. David Mamet is a writer I have loved throughout my career and so I’m thrilled to be bringing his work alive on stage.”

Tom Sturridge said, “It’s a deep privilege to be offered the chance to do this play with Damian and John under Daniel’s direction. I think the play is dangerous and delicate, funny and frightening. American Buffalo is special. I can’t wait to fight to make an audience feel about it as I do.”

Considered a classic of the American canon and recognised as one of Mamet’s masterpieces, American Buffalo premiered at the Goodman Theatre, Chicago and opened on Broadway on 16 February 1977. The play was also adapted into a 1996 film starring Dustin Hoffman (Teach), Dennis Franz (Don), and Sean Nelson (Bobby).

John Goodman is a Golden Globe® and Emmy® Award winning and internationally renowned American actor. Goodman first came to prominence for his Golden Globe® winning role on Roseanne in which he played Dan Conner and subsequently has become well-known for his frequent collaborations on screen with the Coen Brothers in films such as Barton Fink, The Big Lebowski and O Brother Where Art Thou? John most recently starred in Paramount’s remake of 1974’s The Gambler and he is currently starring in season 2 of Amazon’s Alpha House. His upcoming films include Bad Robot’s thriller Valencia and Jay Roach’s Trumbo.

Goodman’s recent stage credits have included his critically acclaimed performance as Pozzo in Waiting for Godot (Studio 54, New York), in which he starred alongside Nathan Lane, and The Resistible Rise of Arturo Ui (The Public Theatre, New York).

His innumerable film credits have included Ben Affleck’s Academy Award® winning film Argo, the multi-award winning The Artist, Inside Llewyn Davis and Monuments Men. In addition to his roles on film, John’s television credits include performances in Aaron Sorkin’s The West Wing, Studio 60 on the Sunset Strip and Dancing on the Edge. Goodman is also well-known for his voice work in Disney’s Monsters, Inc. series in which he stars as Sulley alongside Billy Crystal, The Emperor’s New Groove and The Princess and the Frog.

Tom Sturridge is a Tony nominated English actor who is well known for his work on stage and film. In 2013 Tom won Outer Critics Circle and Theatre World Awards and was nominated for a Tony Award for Best Performance by an Actor in a Leading Role for his performance in the Broadway play Orphans in which he starred alongside Alec Baldwin and Ben Foster. Sturridge made his theatre debut in Simon Stephens’ Punk Rock (Lyric Hammersmith and Manchester Royal Exchange) for which he received Critics’ Circle Best Newcomer and Manchester Evening News Theatre Awards as well as being nominated for the Milton Shulman Award for Outstanding Newcomer at the Evening Standard Theatre Awards. He subsequently went on to star in Simon Stephens’ Wastwater and Polly Stenham’s No Quarter for which he was long listed as Best Actor at the Evening Standard Theatre Awards (both Royal Court Theatre).

Sturridge’s film credits include roles in Istvan Szabo’s Being Julia, Richard Curtis’ The Boat That Rocked, Emma Thompson’s Effie Gray, and Walter Salles’ adaptation of iconic novel On the Road. In 2015, Tom will star in Thomas Vinterberg’s new film adaptation of Thomas Hardy’s novel Far From the Madding Crowd alongside Carey Mulligan as well as Terence Malick’s untitled new feature with Ryan Gosling and Michael Fassbender. Sturridge is also set to play Henry VI alongside Dame Judi Dench and Benedict Cumberbatch in the BBC’s next Hollow Crown series.

American Buffalo is produced in the West End by Matthew Byam Shaw, Nia Janis and Nick Salmon for Playful Productions and Jeffrey Richards.