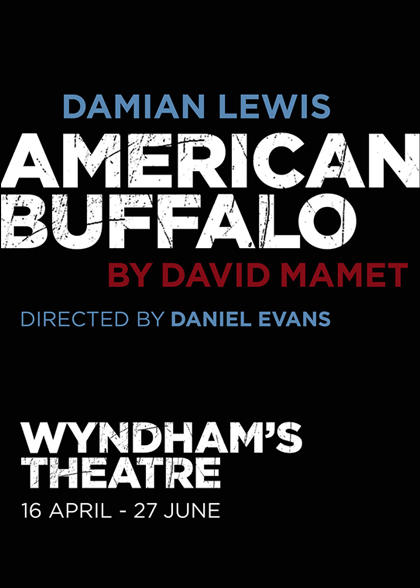 We are delighted to announce a new production of David Mamet’s gripping 1975 play American Buffalo starring Emmy® and Golden Globe® award-winning actor Damian Lewis in the West End next year.

The production will be directed by Daniel Evans for a strictly limited run from 16 April to 27 June 2015 at Wyndham’s Theatre. Tickets go on sale today.

Damian Lewis said, “David Mamet is one of our greatest living playwrights and I’m thrilled to be performing in his brilliant American Buffalo. It’s exciting for me to be back on stage, particularly as I will have the pleasure of working with director, Daniel Evans, who I trained with at Guildhall School of Music and Drama. We’ve always wanted to work together and I really can’t think of a more exciting project to partner on.”

Daniel Evans said, “I’m truly thrilled to be working on Mamet’s incredible play with Damian. I’ve admired his work ever since we trained together at the Guildhall School and I know his particular qualities as an actor will offer us something very special in this part.”

Considered a classic of the American canon and recognised as one of Mamet’s masterpieces, American Buffalo premiered at the Goodman Theatre, Chicago and opened on Broadway on 16 February 1977. The play was also adapted into a 1996 film starring Dennis Franz (Don), Dustin Hoffman (Teach) and Sean Nelson (Bobby).

Damian Lewis OBE won unanimous international acclaim for his role in Emmy® and Golden Globe® award-winning drama Homeland. Lewis starred as Sergeant Nicholas Brody opposite Claire Danes and was awarded the 2013 Golden Globe for Best Performance by an Actor in a Television Series and a 2012 Primetime Emmy® Award for Outstanding Lead Actor in a Drama Series among other accolades for his role. With an expansive list of diverse film, theatre and television credits Damian Lewis has evolved into one of this generation’s most respected and sought-after actors.

Prior to his role in Homeland, Lewis first came to the attention of international audiences in 2001 with his Golden Globe-nominated performance in the award-winning HBO miniseries Band of Brothers, directed by Steven Spielberg and produced by Tom Hanks. He also starred as Soames Forsyte in the acclaimed British production of The Forsyte Saga and Charlie Crews in Life. Lewis will star as Henry VIII in Wolf Hall opposite Mark Rylance in the upcoming 2015 BBC Two television miniseries adaptation of Hilary Mantel’s Booker-Prize winning novels Wolf Hall and Bring Up The Bodies.

American Buffalo marks Lewis’s return to the stage since he starred as Alceste in Martin Crimp’s 2009 adaptation of The Misanthrope opposite Keira Knightley. After training at the Guildhall School of Music and Drama (alongside director Daniel Evans), Lewis joined the British theatre community and appeared in a number of plays between 1993 and 1998, primarily as a member of the Royal Shakespeare Company. During that time, he starred as Laertes in Jonathan Kent’s Broadway production of Hamlet opposite Ralph Fiennes. In 2003, Lewis returned to the London stage opposite Helen McCrory in Five Gold Rings at the Almeida Theatre. In 2005 he starred in the National Theatre’s production of Ibsen’s Pillars of the Community.

In addition to his illustrious work on stage, Lewis has recently appeared on film in Julian Fellowes’ recent adaptation of Romeo and Juliet which starred Douglas Booth and Haliee Steinfeld in the titular roles, The Sweeney and David Gordon Green’s Your Highness. Lewis has recently completed production on a number of films due for release in 2015 which include Werner Herzong’s Queen of the Desert opposite Nicole Kidman, the adaptation of John le Carré’s novel Our Kind of Traitor alongside Ewan McGregor, Stellan Skarsgard and Naomie Harris and The Silent Storm which received its world premiere in October 2014 at the BFI London Film Festival.

As an actor Evans won the Laurence Olivier Award for Best Actor in a Musical in 2001 for his role in Merrily We Roll Along and again in 2005 for Sunday in the Park with George. In 2008, Sunday in the Park with George transferred to Studio 54 on Broadway and was nominated for nine Tony Awards including Best Actor in a Musical for Evans. His extensive theatre work includes roles with the Royal Shakespeare Company, Donmar Warehouse, Royal Court Theatre and National Theatre.

David Mamet is a Pulitzer Prize-winning playwright, screenwriter and director who won the New York Drama Critics’ Circle Award for American Buffalo. His acclaimed plays include the Pulitzer Prize winning Glengarry Glen Ross, Oleanna, Boston Marriage, Speed-the-Plow, Edmond, Race and The Cryptogram (which had its world première in London). His upcoming new play China Doll will make its world première on Broadway in 2015 starring Al Pacino. He is a member of New York’s Atlantic Theater Company, which he founded in 1985 with William H. Macy.

Further casting will be announced in due course.